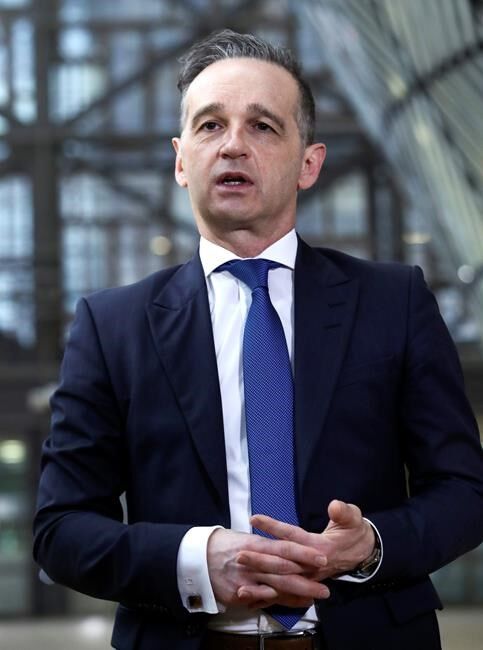 German Foreign Minister Heiko Maas speaks to the media as he arrives for a meeting of EU foreign ministers at the European Council building in Brussels, Monday, Feb 22, 2021. European Union foreign ministers on Monday will look at options for imposing fresh sanctions against Russia over the jailing of opposition leader Alexei Navalny as the 27-nation bloc considers the future of its troubled ties with the country. (Yves Herman, Pool via AP) 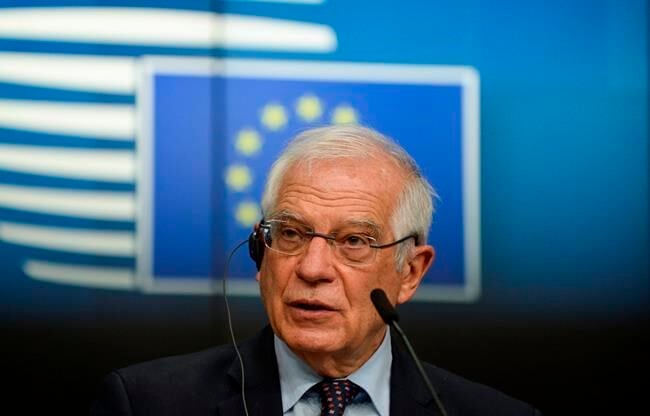 German Foreign Minister Heiko Maas speaks to the media as he arrives for a meeting of EU foreign ministers at the European Council building in Brussels, Monday, Feb 22, 2021. European Union foreign ministers on Monday will look at options for imposing fresh sanctions against Russia over the jailing of opposition leader Alexei Navalny as the 27-nation bloc considers the future of its troubled ties with the country. (Yves Herman, Pool via AP)

BRUSSELS - European Union foreign ministers agreed Monday to impose new sanctions against Russian officials linked to the jailing of opposition leader Alexei Navalny, and expressed concern that the government in Moscow appears to see the 27-nation bloc as an adversary.

“We reached a political agreement to impose restrictive measures against those responsible for (Navalny's) arrest and sentencing and persecution,” EU foreign policy chief Josep Borrell said after chairing their meeting in Brussels. He gave no details about the sanctions, but said that he hoped they would be finalized in about a week.

Borrell suggested that those targeted wouldn't include oligarchs close to President Vladimir Putin, as Navalny's supporters have requested.

Navalny, 44, an anti-corruption investigator and Putin’s most prominent critic, was arrested in Moscow last month upon returning from Germany, where he spent five months recovering from a nerve-agent poisoning that he blames on the Kremlin. Russian authorities have rejected the accusation.

Earlier this month, a court sentenced Navalny to two years and eight months in prison for violating the terms of his probation while recuperating in Germany. The sentence stems from a 2014 embezzlement conviction that Navalny has rejected as fabricated.

The European Court of Human Rights has also ruled that it’s unlawful. Navalny’s arrest and imprisonment have fueled a huge wave of protests across Russia. Authorities responded with a sweeping crackdown, detaining about 11,000 people, many of whom were fined or given jail terms ranging from seven to 15 days.

“There is a shared assessment in the Council that Russia is drifting towards an authoritarian state and driving away from Europe," Borrell told reporters.

Given Moscow's apparent path of “confrontation and disengagement,” Borrell said the bloc will work on three tracks: pushing back when Russia infringes international law, containing it when it pressures the EU, and engaging on issues that are in Europe's interests.

So far, EU countries have been deeply divided over their approach to Moscow. Russia is the EU’s biggest natural gas supplier, and plays a key role in a series of international conflicts and key issues, including the Iran nuclear deal, and conflicts in Syria and Libya.

European heavyweight Germany has strong economic interests there, notably the NordStream 2 undersea pipeline project, and a number of countries, including France, are also reluctant to wade into any sanctions battle over Navalny.

“We need Russia to resolve many international conflicts, and so that will also be a question we must deal with: How is it possible to maintain a constructive dialogue with Russia, even though relations between the EU and Russia have certainly reached a low point?” German Foreign Minister Heiko Maas said.

The meeting came two weeks after Borrell was publicly humiliated by Russian Foreign Minister Sergey Lavrov during a trip to the country. Russia expelled diplomats from Germany, Poland and Sweden, accusing them of attending a rally in support of Navalny.

Borrell found out about the move by social media. The three retaliated by each declaring a Russian diplomat “persona non grata.” Criticism of Borrell initially mounted, but Lavrov’s behaviour now seems to have united the Europeans, at least publicly, in their opposition to Moscow’s attempts to further divide them.

“We confirmed our unity as our greatest asset,” Borrell said. “At the same time, we must define a modus vivendi to avoid permanent confrontation with a neighbour who unfortunately seems to have decided to act as an adversary."

U.S. Secretary of State Antony Blinken joined the ministers via videoconference for part of their meeting, with talks focusing on Russia but also China. Borrell said the exchange was “very, very encouraging," and showed Washington's willingness to not only renew ties but to join in global leadership on the coronavirus, economic recovery, climate change and protecting democratic values.

Geir Moulson in Berlin contributed to this report.