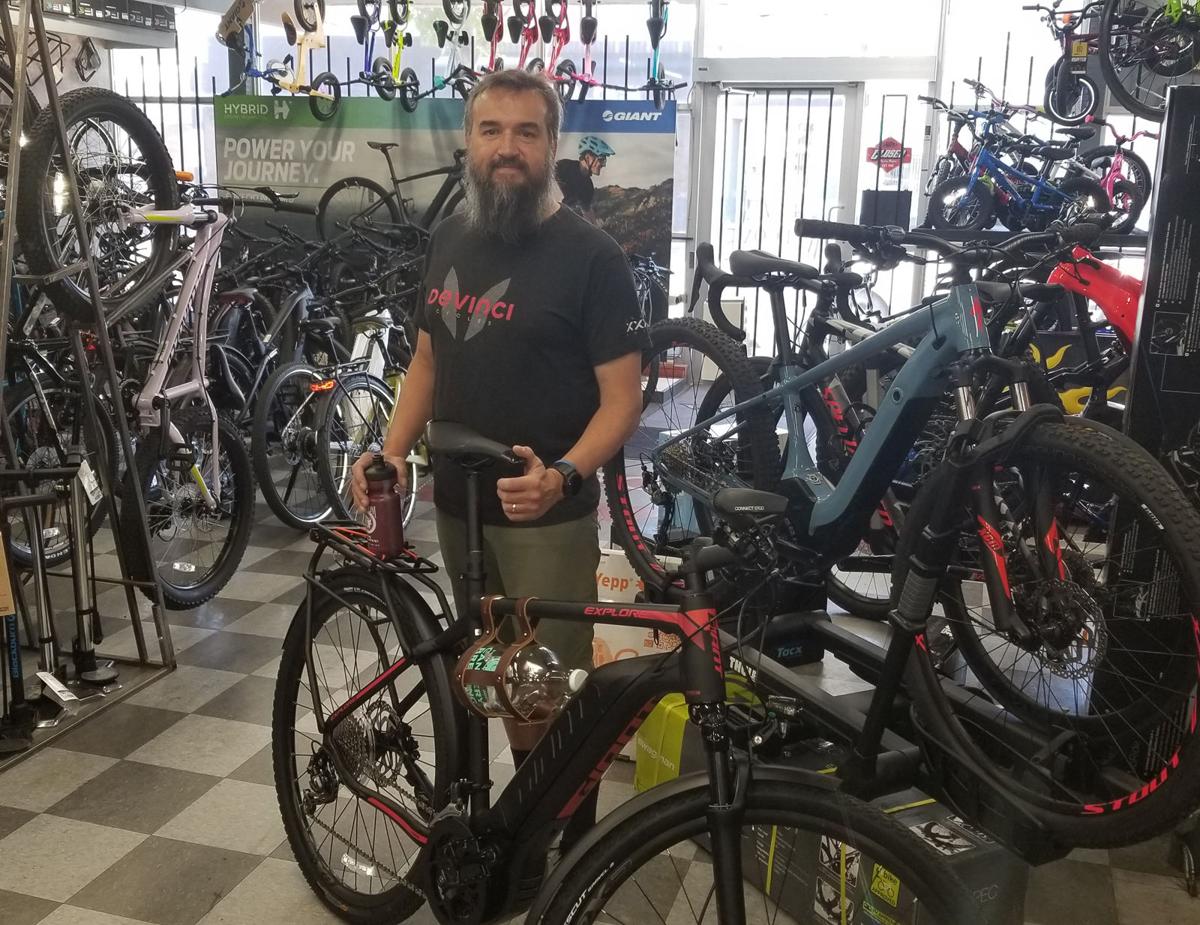 Kurt Flaman, the longtime owner of Freedom Bike Shop on Main Street in downtown Penticton, says the sales of bicycles and E-bikes have been strong since early spring despite the effects of the COVID-19 virus 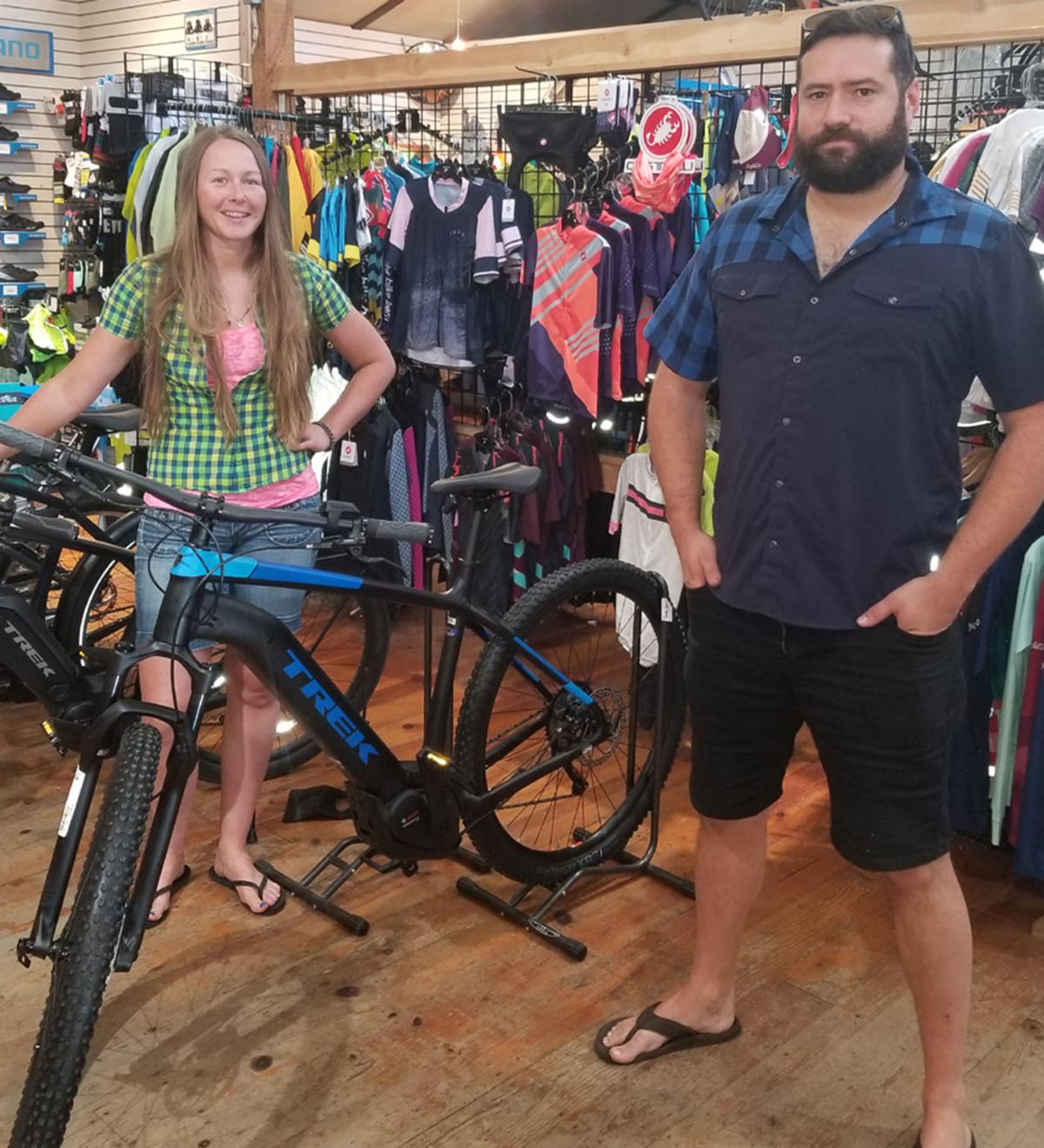 Geoff Prowse and Tara Scott, co-owners of Penticton's The Bike Barn along with partner Will Pratt, show off one of the many E-bikes they have on sale in their shop on Westminster Avenue West. The Bike Barn originally closed in early March due to the COVID-19 virus, but sales have skyrocketed as more and more people get outside after weeks of being cooped up at home.

Kurt Flaman, the longtime owner of Freedom Bike Shop on Main Street in downtown Penticton, says the sales of bicycles and E-bikes have been strong since early spring despite the effects of the COVID-19 virus

Geoff Prowse and Tara Scott, co-owners of Penticton's The Bike Barn along with partner Will Pratt, show off one of the many E-bikes they have on sale in their shop on Westminster Avenue West. The Bike Barn originally closed in early March due to the COVID-19 virus, but sales have skyrocketed as more and more people get outside after weeks of being cooped up at home.

When you consider the global COVID-19 pandemic kept people locked inside for weeks on end and interrupted regular social contact, it’s no big surprise local cycling shops have remained busy and thriving over the past several months.

While so many other Penticton and area businesses closed or saw drastically-reduced sales since COVID-19 was declared a pandemic the second week in March, that has not been the case at Freedom Bike Shop and The Bike Barn.

The two most-popular cycling and E-bike sales and service operations in Penticton have confirmed business has been booming, especially since workplace restrictions were lifted and many businesses were allowed to reopen in early June.

Kurt Flaman, the long-time owner of Freedom Bike Shop at 533 Main St. in downtown Penticton, said his full contingent of 14 staff members has been kept extremely busy selling and repairing bicycles, electronic-assisted bikes, accessories, clothing and all other cycling-related merchandise.

Because cyclists can enjoy their passion outdoors, in small groups and away from others, the overall effect of COVID-19 has had far less impact on his business than most others, said Flaman.

“It has been hectic and chaotic these last three months, trying to manage peoples’ anxieties and keep everybody safe,” he said. “Early on, we figured out we wouldn’t have to lay anybody off. We had to manage social distancing and safety measures because of COVID and that was a big challenge, so we needed as many, if not more people … to find product the people needed and find solutions, while making sure everyone was safe.”

The fact the pandemic hit in early spring, which is traditionally the beginning of cycling season, was beneficial to businesses like Freedom, said Flaman.

“There’s no good time for something like this, but it happened in spring, which is normally our busy time of the year anyway,” he said. “I think people have had plenty of time on their hands to get out and ride and get outside. There’s also the family aspect in that cycling was one of the things you could do safely as a family outside and not have to worry about anything.”

While he doesn’t know if overall business is at record levels, it’s close, said Flaman.

The growing popularity of E-bikes — or electronically-assisted bicycles — has been an added bonus, he said.

“I would say it is definitely been one of the busier years to the beginning of the (cycling) season,” he said. “Sales are good and consistent. We always have lots of bikes and lots of selection and I would say we actually have the widest and broadest and deepest selection of E-bikes in the Okanagan, by far. We have some great brands and great partners who have access to a great supply chain, so we haven’t been too distressed for supply.”

The quality and diversity of E-bikes has grown leaps and bounds over the past five years, said Flaman.

There is a legal restriction on E-bikes to not exceed 32 kilometres (20 miles) per hour and they can’t have a throttle, he said.

His staff has access to the latest software and technology to promote sales, diagnose problems and make repairs on regular and E-bikes, he said.

The most-expensive E-bikes can now travel up to 175 kilometres on a single charge.

Over at the Bike Barn, located at 300 Westminster Ave. West, co-owner Geoff Prowse and his staff are also busier than normal now that the summer has started and more and more people are getting outdoors after being stuck inside during isolation.

Prowse’s grandparents started The Bike Barn way back in 1971 and the business has been located at its current location since 1983.

When the pandemic struck, Prowse and his business partners Tara Scott and Will Pratt, decided to close the doors for a week.

“We didn’t want to risk our staff to any exposure,” he said. “When the government deemed bike shops an essential service, we opened up doing appointment-for-repairs mostly. We then invited customers into the shop one person at a time. We also set up a drive-through service outside … people could pick up parts of drop off their bike for repairs.”

Because the nicer spring weather increased the demand for new bikes, there were often lineups of customers 15 and 20 deep back in March, he said.

“Because many people weren’t working and wanted to get outside and get some exercise, they wanted to buy bikes or get them serviced and the shop was filled up. It was taking up to a month to get some repairs done because we were so busy.”

The Bike Barn reopened its doors, with social distancing measures in place, just under three weeks ago.

Prowse agrees bike and E-bike sales have been excellent, despite the difficulties caused by the virus.

“Certain sales have been way up,” he said.

“More people who have never cycled before are buying bikes. Entry-level bike sales have skyrocketed. There was a dip early on when we had to close, but overall there definitely hasn’t been any dip in overall sales.”

Owning a cycling shop in a city and region that gets some of the best weather in Canada is certainly beneficial, he said.

“It doesn’t get much better,” he said. “Sales have been so good that we currently don’t have many bikes left to sell. That could become a problem in the coming weeks now that summer has started. Not having enough bikes to sell is a problem we’ve never really had to deal with before.”

Prowse concurs that E-bike sales have taken off to the point he estimates between 25 and 30 per cent of sales the past couple of years are in this niche.

“It’s now the fastest-growing part of our business and it’s really taken off the last three years,” he said. “It hasn’t taken away from our regular bike sales, but has introduced a whole new clientele.”

For more information on Freedom Bike Shop, you can visit the Main Street location, call 250-493-0686 or visit the website at: freedombikeshop.com.

For more information on The Bike Barn, you can visit their shop, call 250-492-4140 or visit the website at: bikebarn.ca.