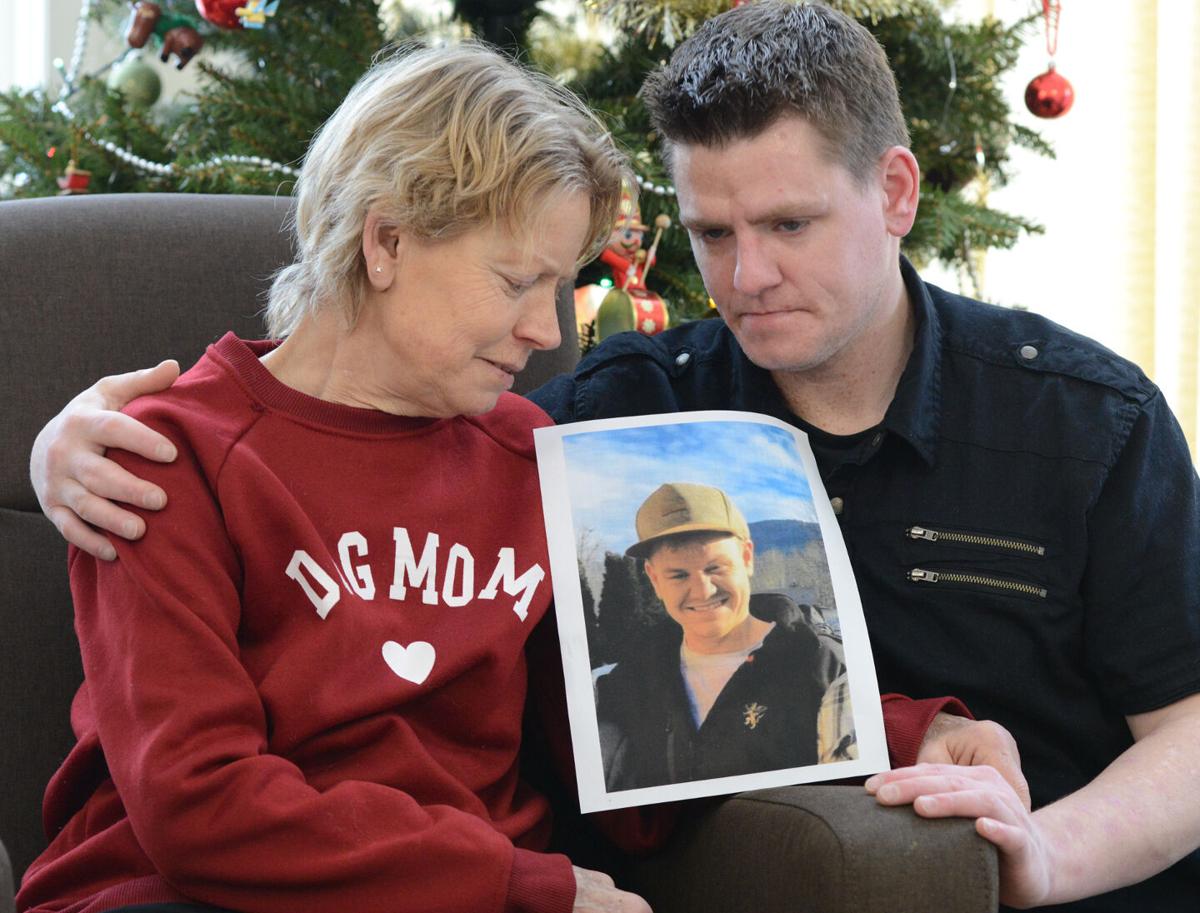 Tyler Lemire with mom Katherine and a photo of the brother and son who died of an overdose in March of this year. Tyler is currently a client of Discovery House where he is beating the same addiction that killed his brother in March. 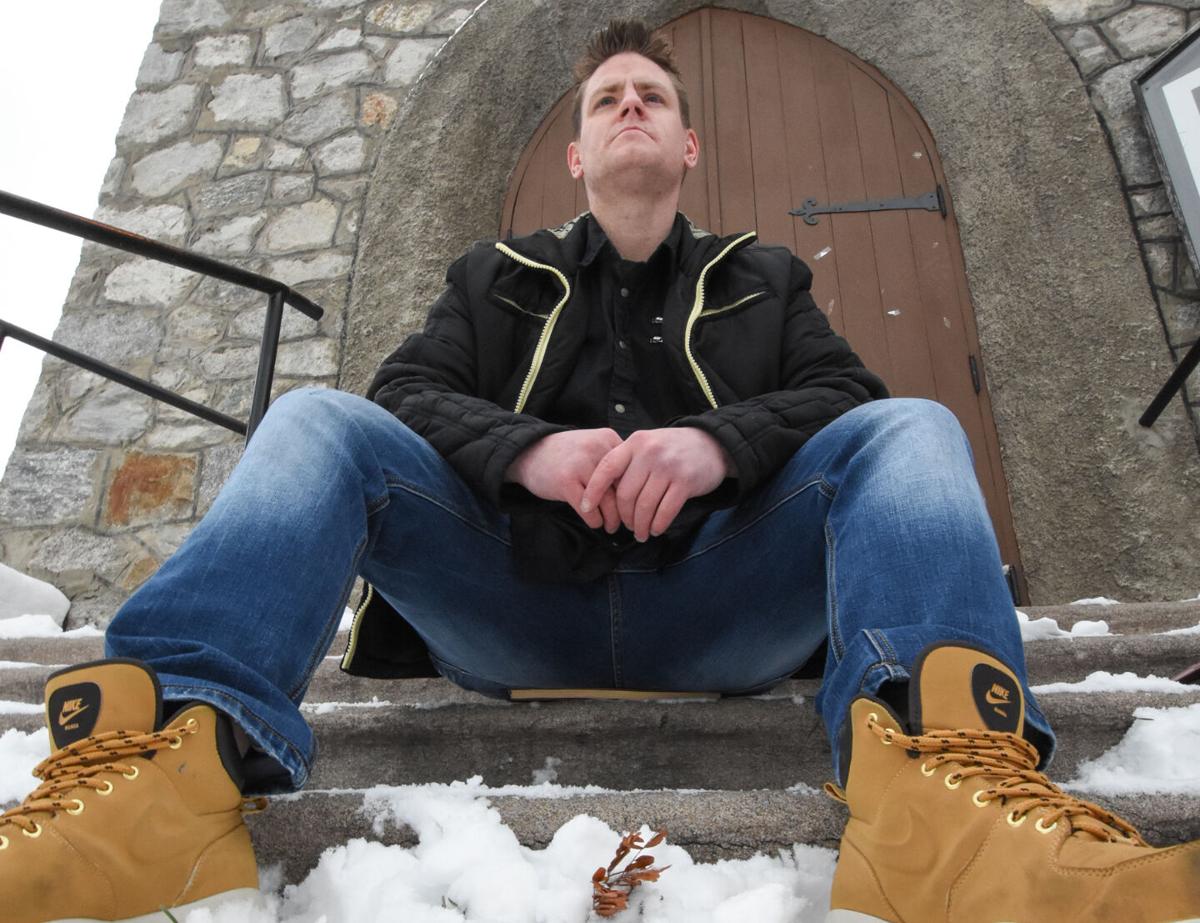 Tyler Lemire with mom Katherine and a photo of the brother and son who died of an overdose in March of this year. Tyler is currently a client of Discovery House where he is beating the same addiction that killed his brother in March.

One of the first times Tyler Lemire remembers being revived from an opioid overdose was about four years ago in Calgary after he let some strangers drive his brother’s 1980s-era Mercedes in exchange for drugs.

“The paramedics found me in the car by myself – so everyone else ditched – sitting up in the passenger seat dead,” the 34-year-old recalls.

The last time he had to be revived from a near-fatal hit was in January or February of this year after using fentanyl in the overdose prevention room at Compass House emergency shelter in Penticton.

“I just remember waking up on the ground. My head was in the lap of one of the staff and he was crying,” says Lemire.

“I started crying too, because it takes a minute for your memory to come back.”

Lemire says it took two staff members and five shots of naloxone, which counteracts the effects of opioids, to bring him back to life.

“They both were like, ‘Tyler, we thought you were gone, man. You were gone for like 20 minutes.”

After previous overdoses – he can’t be sure how many, but estimates there were between 20 and 40, maybe a dozen of which resulted in calls to 911 – he generally refused to go to the hospital. But not that day.

“It was a very close call for me.”

There have been many such close calls during this record-setting year in Penticton, according to data provided by the BC Ambulance Service.

Call volumes rose steadily throughout 2020, from a low of 18 in January to a high of 61 in October. The tally for December stood at 49 through the first three weeks of the month.

It’s no coincidence the number of calls spiked alongside the COVID-19 pandemic, as benefit money flowed and border closures led to an increasingly tainted drug supply.

“Paramedics have seen the impact of the COVID-19 pandemic on the volume of overdose calls across the province,” the BC Ambulance Service confirms in a statement.

Conversely, the number of people in Penticton dying from suspected drug overdoses is down sharply: In 2019 there were a total of 22 suspected overdose deaths in Penticton recorded by the B.C. Coroners Service. There had only been nine in Penticton this year through October.

It’s a testament to the work of paramedics and other first responders.

“When (BC Ambulance Service) paramedics respond to a potential overdose patient, the patient has a 95% chance of survival,” the statement notes.

Fentanyl has been present in about 80% of the province’s suspected overdose victims this year, according to the BC Coroners Service.

But that doesn’t necessarily mean they were all using fentanyl on purpose, explains Lemire.

While he sought out the synthetic opioid because of its powerful effects, others get it inadvertently when dealers add it to drugs like meth or cocaine.

“It’s like Russian roulette. You just never know how strong the dose is going to be – especially if you’re buying from an unreliable source.”

Fentanyl, which is prized by dealers because it’s relatively cheap and easy to obtain, and so potent that a dose about the size to a few grains of sand can be fatal, is also wickedly addictive.

“Once I was wrapped up and fentanyl got a hold of me, I was stuck in a vicious cycle of using, finding ways to get more, getting dope sick, and around and around,” says Lemire.

That cycle included criminality, including one well-publicized incident in March in Penticton during which Lemire allegedly assaulted a cab driver and stole his taxi. Charges were later dropped.

“I was powerless over my addiction,” says Lemire, who is otherwise unable to explain why he kept using fentanyl despite the drug nearly killing him dozens of times and actually succeeding in taking his brother’s life.

But keeping people like Lemire alive long enough to get help isn’t cheap.

The BC Ambulance Service estimates the average call for a ground ambulance costs taxpayers about $900.

That means in the first 10 months of 2020 alone, it cost the public approximately $80,000 to send ambulances 90 times to the Compass House complex where Lemire overdosed, according to separate data obtained from BC Emergency Health Services through a freedom of information request.

“Every ambulance call is not just for an overdose. Sometimes an individual could be having another medical, or mental health crisis, but the majority are in response to an overdose,” Tony Laing, executive director of the Penticton and District Society for Community Living, writes in an email.

PDSCL manages the Compass House complex – 30 emergency beds and 16 units of supportive housing – under contract to BC Housing. PDSCL in November opened a separate 42-bed emergency shelter in the former Victory Church building on Winnipeg Street.

All of it costs big bucks, acknowledges Laing, but the price of doing nothing is incalculable.

“The financial burden is a taxpayer cost, but the cost of not sending an ambulance could be the cost of a life, the life of someone's child, someone's brother or sister, father or mother,” he says. “Who makes that decision?

There are also hidden costs, he adds, like the emotional toll on staff who deal with the fallout of the opioid crisis every day.

“Front-line workers responding to overdoses deserve our support, respect and admiration for the work they are doing,” says Laing.

“Staff pay the price in stress, emotional burnout and physical exhaustion. But they are saving lives. What better reason to go to work each day?”

Penticton fire Chief Larry Watkinson, whose crews as of Dec. 24 had responded to 265 medical calls for suspected overdoses this year, also fears the long-term impact of the opioid crisis, which B.C. declared a public health emergency in 2016.

“With continuous and chronic exposure to these types of situations for our firefighters, I’m worried it’s going to wear on them. Maybe not today or tomorrow, down the road,” says Watkinson.

“Dealing with overdoses and people in these very sad states is emotionally wearing (on first responders). It’s hard on their heads.”

Watkinson says he’s working with the firefighters’ union to develop new mental health resources to help them cope with what they’re seeing, although restrictions on gatherings related to B.C.’s other public health emergency are making that more difficult.

The chief also notes it’s not just the marginalized population drawing on emergency resources, but recreational drug users, too.

Indeed, 55% of the 1,548 people who died of suspected drug overdoses in B.C. in the first 11 months of the year were found inside private residences, according to the BC Coroners Service. (Just for comparison’s sake, COVID-19 had claimed 893 lives in B.C. this year as of Thursday.)

What’s more, “I don’t see an end in sight until we get a control mechanism on the drug sources,” says Watkinson.

The program itself is rooted in the abstinence-based approach of Narcotics Anonymous, says Abraham, but it’s just one part of the “harm-reduction continuum.”

“I think people are coming to understand that that’s actually less costly economically, and it’s less costly on a human scale.”

But that would also require beds being readily available at detox centres and places like Discovery House that are already bursting at the seams, says Abraham.

“Once we’ve naloxoned people and brought them to, then what’s next?” he wonders.

“If you hit rock bottom and you want to go to treatment… it might be a two month-wait.”

Fortunately for Lemire, he had already had an application at Discovery House, so there was a bed waiting for him on Oct. 16 after an eight-day stay in a detox centre – and just four years after he first began using fentanyl in Calgary.

A drywaller by trade, he moved to Sicamous about three years ago to work for a friend’s company and get away from a bad scene in Alberta.

“It wasn’t very long before I relapsed and fell back into my addiction,” he says.

After spending most of the next two years homeless in the Salmon Arm area, his family convinced him to join them in Penticton in November 2019.

Things quickly fell apart. At one point, Lemire and his younger brother, Joshua, were both living at the Compass House shelter.

The brothers finally agreed in February 2020 to enter treatment together at a facility in Chilliwack. But when the time came to leave, Joshua went alone because his older brother backed out.

Joshua left the facility about a month later and overdosed on the bus ride home. He died in hospital March 18 at the age of 29.

“I took it very hard. I was actually in jail when it happened,” says Lemire.

Little did he know then, it was also a personal turning point.

“Losing my brother was my rock bottom, but it took me five months or so to snap out of it and realize I needed help.”

Finally, “My parents said, ‘Go to detox or you’re done,’ and I said, ‘OK.’ It was the best decision I’ve ever made. My parents never gave up on me and I’m so grateful.”

As of Thursday, he has 77 days’ clean time, the longest stretch of his adult life.

Now that he’s coming to grips with his past, Lemire is considering a career in the world of addictions recovery both to honour Joshua’s legacy and so others can benefit from the brothers’ experiences. It would also allow him to give back to society for the all the help he received.

“God must have something planned for me,” says Lemire. “I’m just so lucky.”