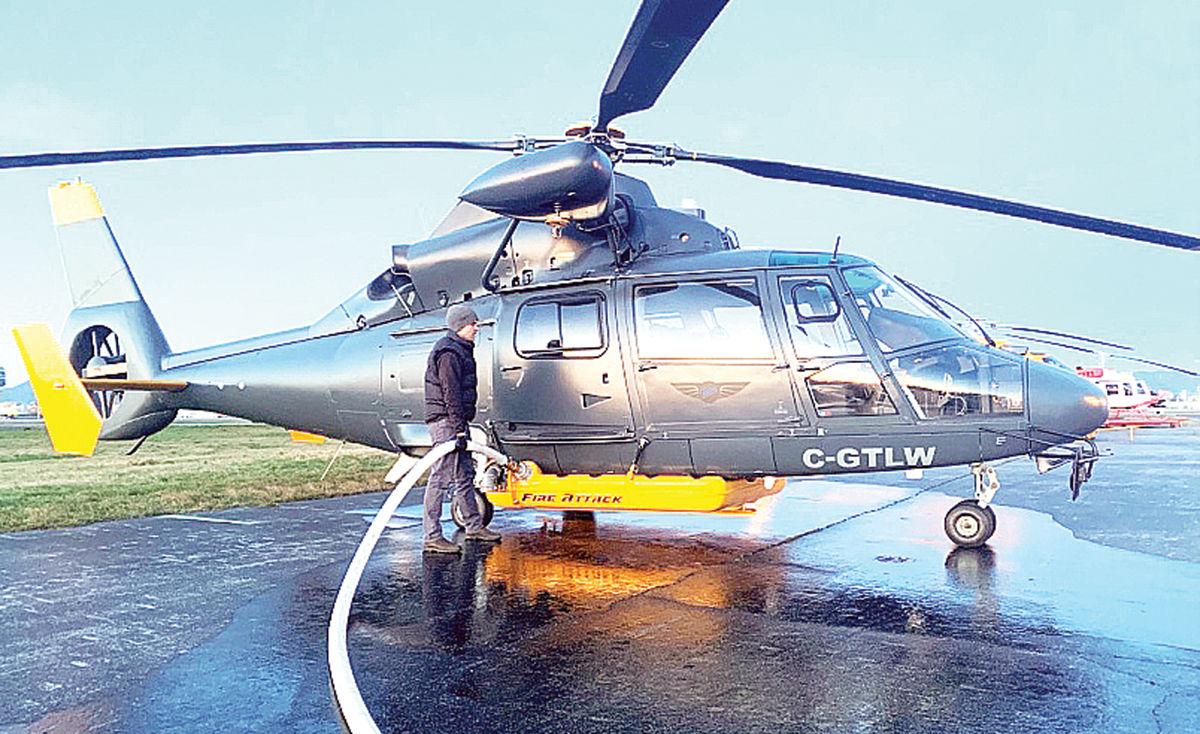 The Airbus AS365 N2 Dauphin used this week by Talon Helicopters and the BC Wildfire Service to test night-vision goggles near Penticton. 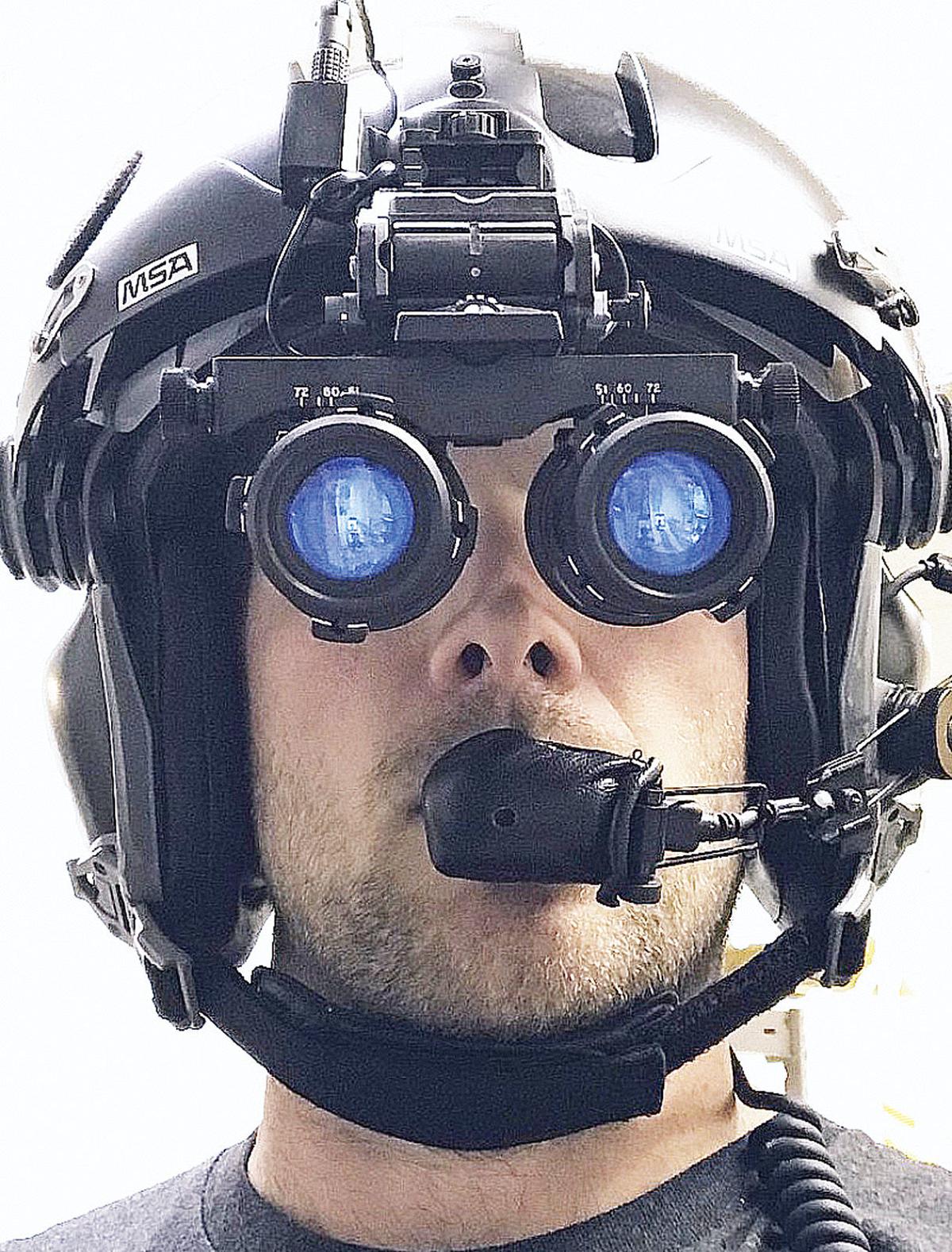 The Airbus AS365 N2 Dauphin used this week by Talon Helicopters and the BC Wildfire Service to test night-vision goggles near Penticton.

Night-vision goggles have been standard equipment on some helicopters for years, and thanks to a loosening of restrictions and historically slow start to the smoky season in the Okanagan, officials from the B.C. Wildfire Service are finally getting a chance to see what the technology can do for them.

Tests were conducted in the steep Carmi area above the east side of Penticton using a privately owned, specially equipped helicopter.

“An NVG-equipped aerial supervisor known as a helicopter co-ordinator flew overhead and identified the ‘targets,’ assessed the working location for safety hazards similar to how they do during the day, and confirmed the ground crews were all at a safe location from the intended drop.

“They then brought the NVG heli-tanker into the site and relayed that information to them, as well as outlining the objectives for their drop. The heli-tanker then confirmed their intended run for safety and viability on a practise run, then performed the drop on the following pass before returning to the staging area for refill by ground crews. Water was used in the drops on small, controlled campfire-sized targets.”

BCWS considers the tests to have been a success.

“They validated that night heli-tanking can be conducted accurately and safely with the available technology and in conjunction with ground firefighters,” the statement added.

“The heli-tanker was able to hit multiple targets with good accuracy similar to daytime results.”

The service hopes to eventually deploy the technology on urban interface fires when people’s lives and homes are at risk.

At the controls for this week’s test flights was Jarrett Lunn, chief pilot for Richmond-based Talon Helicopters, which owns one of just five choppers in B.C. that are equipped with night-vision goggles.

“Up until the recent years, night-vision goggles have been restricted for military, government and police, and it’s only more recently that it’s become accessible for commercial uses,” explained Lunn.

“They’re still a strictly controlled product and you can’t buy them off the shelves.”

Putting the goggles into service on Talon’s Airbus AS365 N2 Dauphin, which can carry 900 litres of water at a top speed of 260 km/h, was a “multi-year” process, said Lunn.

Pilots required five days of training at Topflight Elite Training in Penticton – a company Lunn described as “experts” in the field and that provided the observer helicopter this week – followed by 50 practice events and a Transport Canada certification flight.

Retrofitting the helicopter was another huge undertaking. Lunn said every single switch and instrument with a lightbulb had to be fitted with filters so they’re visible to the naked eye at night but aren’t picked up by the goggles. (To see the gauges, pilots simply look down and out from under the goggles.)

It’s not cheap either: BC Emergency Health Services said in 2018 it spent $1.7 million equipping its four helicopter air ambulances. But the goggles have many other potential commercial uses, including search and rescue, passenger and cargo transport and even filmmaking.

The BC Wildfire Service first tested the technology last year on three trial flights over the Richter Mountain fire west of Osoyoos and the Eagle Bluff fire north of Oliver. The air crew used the goggles to help map the fire areas and identify hot spots.

It marked the first time the technology had been put to such use in Canada, according to the service, which plans to keep experimenting.

“The next phase of the night-vision trials will involve responding to an active wildfire, if possible,” the BCWS said in its statement.

Meanwhile, BCWS spokeswoman Taylor Coleman confirmed Friday this season is off to a slower start than average.

As of Friday afternoon, 199 fires had scorched 673 hectares across the province. On the same day last year, there had already been a total of 479 fires that burned 12,048 hectares.

In the Kamloops Fire Centre, which includes the Okanagan, 41 fires had scorched 117 hectares as of Friday afternoon, versus 206 fires that burned 4,320 during the entire 2019 season.

A cool, wet start to summer has also knocked down the fire-danger rating to low or very low across most of B.C.

“Historically, July is the month in which B.C. receives the most lightning. Wildfire ignition due to lightning strikes will be heavily dependent on the amount of precipitation associated with the lightning, as well as the number of days without rain prior to lightning events. For the time being, BC Wildfire Service is expecting a ‘normal’ fire load based on the current conditions.”