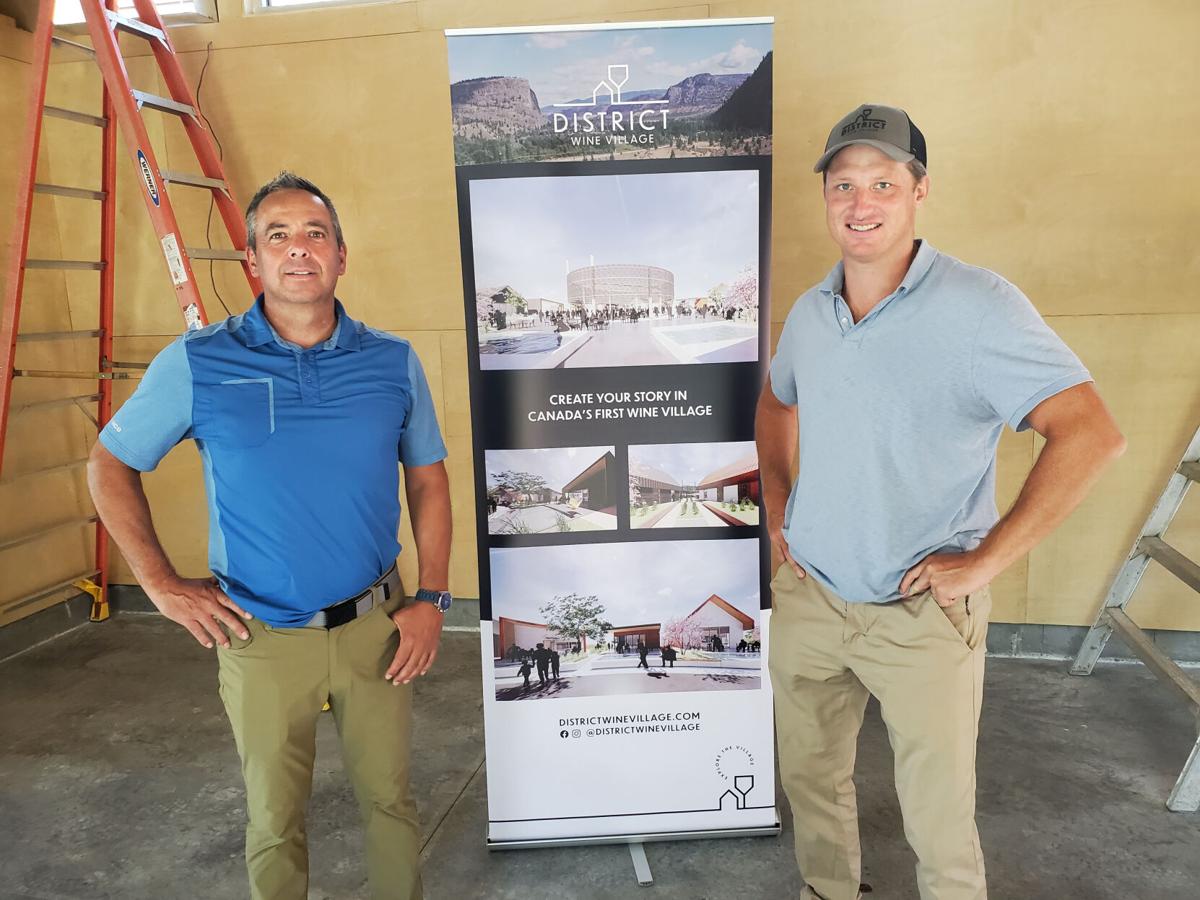 District Wine Village operations director Michael Daley (left) and Greyback Construction president Matt Kenyon stand in front of a concept drawing of Canada' first ever wine village. Six of 16 small winery, craft breweries and distilleries0 are now under construction. The village is scheduled to open in May of June of 2021. 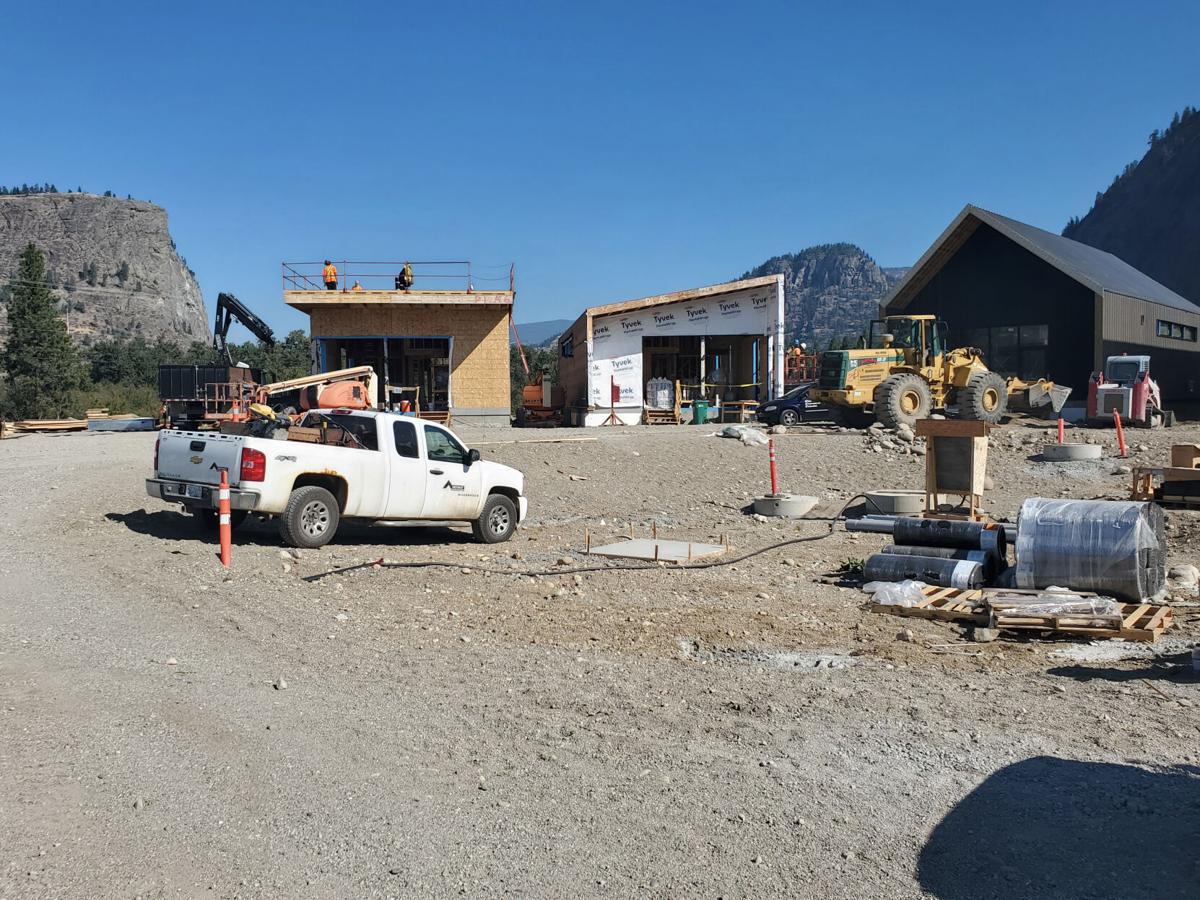 Construction of the District Wine Village, near Oliver, is well underway.

District Wine Village operations director Michael Daley (left) and Greyback Construction president Matt Kenyon stand in front of a concept drawing of Canada' first ever wine village. Six of 16 small winery, craft breweries and distilleries0 are now under construction. The village is scheduled to open in May of June of 2021.

Construction of the District Wine Village, near Oliver, is well underway.

The countdown officially began to opening day as Canada’s first-ever wine village is scheduled to open next summer near Oliver.

The first phase of the village will see 16 small wineries, craft breweries and distilleries open side-by-side in a circular configuration. All of the facilities must use products sourced in B.C., said Daley.

More than four acres of grapes have also been planted on site and there are already plans to develop a second phase that will include slightly larger wineries and craft breweries.

Six of the 16 buildings are now under construction and two wineries are on schedule to start crushing grapes within the next couple of weeks, he said.

The project was the brainchild of Penticton’s Kenyon family, which owns Greyback Construction. The family has helped build more than 40 wineries in the Okanagan Valley over the past 20 years.

“This is Canada’s first wine village … there are a few of them around the world,” said Daley. “There is one in Washington State that Matt and I had the chance to go down and visit, one in California called Tin City that is doing very well. It’s kind of a new phenomenon. It’s a one-stop shop for people.”

The individual wineries, breweries and distilleries are being built on the outside of a large central hub that is licensed to serve 600 customers. The central hub will host various art shows and live musical performances. In the winter months, the paved sidewalk will be turned into an outdoor skating rink. The Kenyon family recently committed the additional $300,000 needed to build the outdoor skating oval.

“All of the wineries will be built on a slight elevation so guests will be able to look into the centre hub,” he said. “Each building will have its own licensed patio outdoors, so people can migrate through and decide which winery, brewery or distillery they want to visit, then come back down and enjoy the outdoor complex afterwards.”

A large culinary centre will also be built that will offer quality food and pop-up kitchens for special events held throughout the year.

All 16 wineries, breweries and distilleries will have their own separate liquor and operating licences.

Each of the wineries will have to sign three to five-year leases. They will all be smaller, boutique wineries that produce between 2,000 and 2,500 cases annually.

Two full sets of grape crushing equipment are also being built, which will be shared by the various winery owners.

“We’re putting in the tanks, the chillers and a lot of the other capital outlay,” said Daley. “We’ve really tried to minimize the capital outlay to assist those smaller producers and growers that can’t afford to spend $3 or $5 million on a winery.”

The business park in which the 11-acre Wine Village is owned by the Osoyoos Indian Band, which signed a long-term lease with the Kenyons.

The entire village should be completed by June 2021.

“We’ll have at least half of those 16 buildings operational by next year,” he said. “The following ones will come on with the (grape) crush of 2021 and we hope to be fully occupied by the following year in 2022,” said Daley.

More than $2 million was spent on site infrastructure before construction on any of the buildings began, said Kenyon.

“We’re fully committed to this project,” he said. “It’s moving forward and not some pie-in-the-sky idea. There’s still a lot of hard work ahead of us over the next six months. Construction will continue all winter.”

“There’s a lot of economic benefits with this project for sure,” he said.

The marketing plan includes announcing the individual wineries, breweries and distilleries that have signed on to join the village once a month starting Oct. 1, said Daley.

The location just metres away from Highway 97 “right in the core of the Okanagan wine region” is ideal, said Daley.

“We feel this will become a destination onto its own and people will go enjoy other wineries in the area,” he said. “We hope this will be their first stop or end stop at the end of the day.”